Those flying stinging pissed off critters seem to have a special talent for ruining your day. Not only stinging seemingly without cause, they also prey on your bees! As with anything encountered in nature, it is worth our effort to understand not only their role in the ecosystem, but their biology. This gives us a perspective on effectively controlling their numbers while minimizing unintended consequences. They do have a place in nature. They prey on other bugs, such as spiders, plant worms and caterpillars. Special in the spring time. There are a few gardeners that actually cultivate Yellow Jackets for pest control.

The biggest difference between Yellow Jackets and Honey Bees, is Yellow Jackets are carnivorous - Honey Bees are pure vegetarians. Yellow Jackets also over winter with very small or even single member nests - the queen. In early Spring, these queens wake from their winter slumber to hunt protein to raise up her new cadre of summer workers. So, if we can 'control' these Spring queens, we can greatly reduce the number of foraging workers that get into our picnics, lunches and hives!

This video demonstrates the aggressiveness of Yellow Jackets. He simply places a camera near a nest entrance, well - just watch. Quite dramatic! 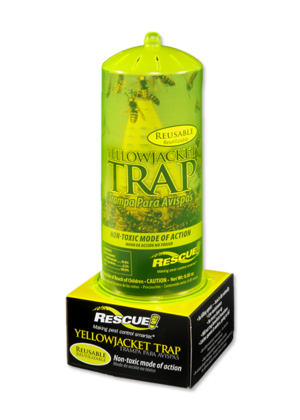 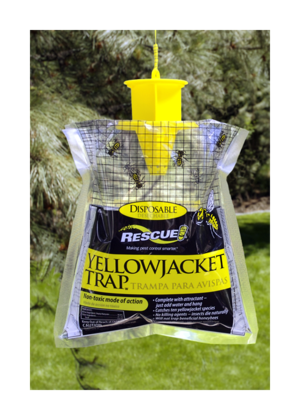 If you'd like to read a LOT more about YJs, EPWs as well as find some handy ID charts, visit this site. One of the better ones I've found.

The key is to star early. If you're being pestered by Yellow Jackets or loosing bees, you're already too late in the season to take anything but the most drastic of measures. Don't expect immediate results either. It's taken me about 3 to 5 years of trapping to knock local populations down to a tolerable level. Worse, if you skip one year - they can rebound with a vengeance.

My preferred method of control is a Yellow Jacket Trap. Baited with heptyl butyrate attractants, these traps pose NO THREAT to our bees at all. Placed early enough in Spring, they can catch those emerging queens and drastically dent the summer's populations.

The easiest trap to deploy is a store bought type. One I've used over the years is the 'Rescue' brand, reusable trap shown at left. These come with a bait that lasts for a few dozen days. You can buy longer lasting baits (10 weeks) as well as refills for either. I've not yet found a good DIY protein based bait for these traps. Maybe the same bait used for the Nuclear Option would work. I haven't tried it, yet. These traps emit an odor which draws in protein (meat) seeking insects. Once inside, they can't figure out how to get out again and die within the container.

Rescue also sells a disposable trap - it's even easier to use, but more expensive over time. Set it, use it - when it's full or no longer effective, you throw the whole thing away and start over.

Apparently these have been on the market for a few years, but I've just now come across them. This commercial trap uses 3 different chemical baits to attract Waps, Hornets and Yellow jackets (the W-H-Y bit). I've not used them myself, yet - but reviews are encouraging! Called a WHY Trap and sold by Rescue, you can find these at most any garden supply shop as well as online.

The key to an effective trap use is placement and bait. As both of these use the factory supplied baits - half the battle is already won. That leaves placement. Remember, these things not only stink, but they'll also attract Yellow Jackets. Do not put them were people or pets might also find themselves! Put them out on the perimeter of your yard, away from the house. Put them above head height, so if you're out mowing or doing yard work, you don't inadvertently meet up with one of these nasty critters. 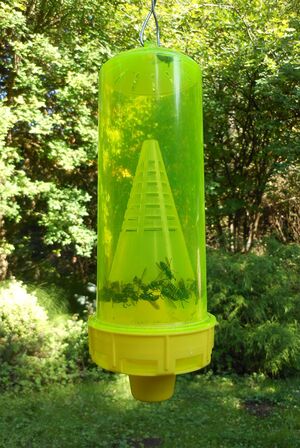 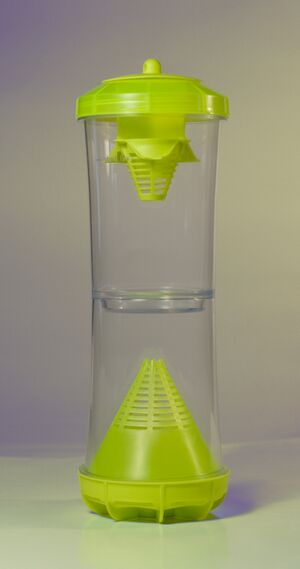 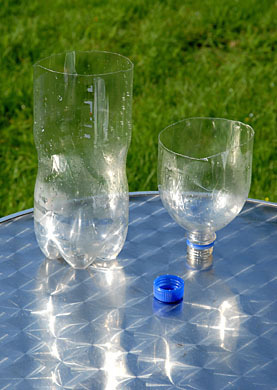 Preparing a water bottle to become a Yellow jacket trap. 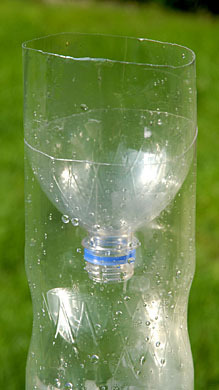 Assembled DIY Yellow Jacket trap made from a water bottle.

You can make your own traps as well. There are many plans and sites on the internet with how-tos, plans and more detials. Likely the easiest is the 'water bottle' trap. Essentially, you cut the top off an empty water bottle, near the shoulders, discard the cap, invert the top and stick it back into the bottle. Idea is to create a funnel like opening pointing down, into the bottle. Tape, staple or wire things together, add your bait and put it out. You do not need a layer of water or other fluid to drown the Yellow Jackets. Just the bait. Dead Yellow jackets, ironically, make a fairly decent bait for Yellow Jackets and other wasps.

Bait choice is a key factor to effectiveness of these DIY traps. Timing also comes into play. In the Spring, when we're trying to catch those queens, protein (meat) baits are the most effective. What I've found online says Swanson's canned white chicken breast meat is one of the, if not the most effective baits you can use. But, it's a bit expensive to just throw away. You may want to try such things as a piece of hot dog, left over chicken skin or pretty much anything else you can drop into the trap that'll develop a 'meat' aroma. Some report success using beer! Some also advocate the use of apple cider vinegar. Be careful with fruit based or other sweet baits as you will also attract bees. And, you have to be patient. In early Spring, there may not be as many queens foraging as we'd hope to trap - just not seeing any dead Yellow Jackets in your trap may not mean you've a poor bait. You may just be lucky, timed things wrong - or yes, have a poor bait. Read up and try several. See what works for you.

According to a published article from the University of California Ag & Natural Resources office, Yellow Jackets are NOT attracted to rotting meat. To keep things effective, you'll have to change out your meat based baits, frequently. With that in mind, it may just be easier to use the commercial bait refills from Home Depot or Sutherland's. Made from heptyl butyrate, this bait is fairly selective for Yellow Jackets alone. 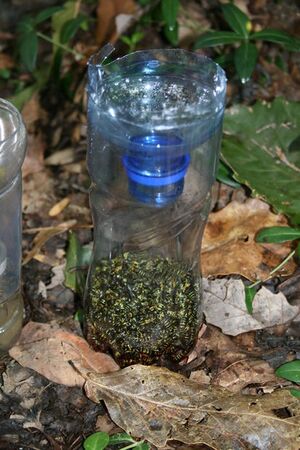 These things can be quite effective

A PDF with more information on YJs and controlling them in the apiary.

There is a method - a bit drastic, but effective - to essentially eliminate all Yellow Jackets within about a quarter mile radius. Rather than repeat it all, I'll just link to the Youtube video and leave it at that.

This link is to the paper he references in the video.

Protect your honey bees! Fipronil is one of the most toxic agents to honey bees you can buy. It'll kill your bees as easily or even easier than Yellow Jackets if they contact it. Key is to use baits that have NO CHANCE of attracting honey bees. Also, caging your baits so other animals (pets, kids, birds, squirrels, skunks, possum, etc) can not get to the bait is of high importance. We do NOT want any 'unintended consequences'.

You can read up on Fipronil in the 'pedia.

Katharina, a Master Beekeeper, released this PDF slide deck. It's well worth a read through!

Bit of a different method of application - but offers a lot of info.